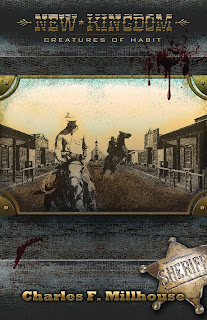 CREATURES OF HABIT: The last place Caleb Johnson thought he would end up would be New Kingdom, Nebraska. Released from the Yuma Territorial Prison in the late 1800’s, Caleb finds himself lost in memories of a life he can no longer have and unprepared for the life about to be thrust onto him. When Caleb rescues Morning Dove, an Indian Maiden, who has fell victim to a group of vampires on a blood hunt, he finds himself in a town dominated by Black Riders, witches, ghosts and a werewolf. Faced with creatures from out of nightmares, Caleb allies himself with the supernatural in his attempt to free New Kingdom from the evil that has embedded itself in the small frontier town.
buy a copy 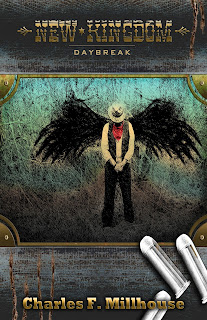 DAYBREAK: Nebraska 1886: The time of the Black Riders is over and the small western town of New Kingdom has finally begun to show sings of normality. After killing the vampire Lucius Krull, Caleb Johnson has taken the job of town sheriff, but his heart is heavy. After being resurrected by the angel Eve and gifted with angelic powers, Caleb has begun to second guess his existence and while New Kingdom flourishes he strives to understand his new gifts... while struggling to keep the peace.
Peter Prokofiev still infected with his werewolf curse has become Caleb’s deputy, a loyal friend and confidant. They are the only two that stand in the way of the dark and loathsome creatures that have taken residence in the small Nebraska town. Peter finally feels like he has found a place to belong and no longer an outsider. As fates would allow however, Peter comes face to face with his past, when the man who condemned him to a Russian prison travels to New Kingdom. Soon after, Peter’s werewolf transformations begin to take a terrifying and horrific turn.
With Peter’s werewolf out of control, Caleb must fight to save his friend while facing even more perils – the arrival of a lovely petticoat named Adelaide Turner, whose own agenda for New Kingdom ushers in the arrival of the mysterious Sebastian – his mission is one of death and blood. Also arriving in town is Emil Bauer. A scientist bound for the secluded sanitarium Daybreak – whose ungodly experiments have drawn the attention of the illusive Mr. I.
At the forefront of New Kingdom’s woes, stands the Church. Reverend Howard Pittman refuses to be kept out of God’s house, but the house of worship has ideas of its own and rebuffs his attempts to enter its sanctum. Howard is relentless. Confidant he can drive out whatever evil lurks within – but what waits inside the church is a revelation Howard is unprepared to face.
buy a copy 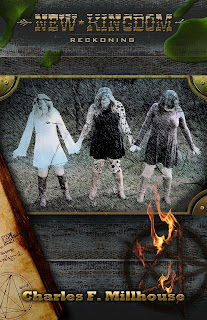 RECKONING: THE FINAL CHAPTER HAS BEGUN:
The seven seals are broken. The Four Horsemen are riding. The apocalypse has begun. All that stands between the end of the world and the chance for a future is the Sheriff of New Kingdom, Nebraska - Caleb Johnson.Almost four years have past since Caleb arrived in the small wayward town, the nexus of all-evil. Trained to fight the dark forces by an angel named Eve, he uses his new skills to hold back the malevolent monsters bent on mayhem and total destruction.Aiding him in his fight to save the future, is his deputy, a werewolf, Peter Prokofiev. His lover and demon hunter, Adelaide Turner, and Howard Pittman, a former slave turned reverend who trusts God will save them all.But the balance of power shifts when a pit into Hell opens inside of New Kingdom, granting ancient and long forgotten evils an entrance into the earth.In a last ditch effort to reforge the seven seals and stop the apocalypse, Caleb and his group fight one final desperate battle. The winner takes all, and the price of losing will cast everyone into eternal damnation.In the final moments New Kingdom will face its fate and the dramatic confrontation will leave you wanting more.
buy a copy